A 5 block radius around our hotel

We tried to look healthy as we walked through the customs area of Auckland's International Airport. I made the mistake of telling the truth on our arrival cards, so the yes box marked next to "farmland or jungle in South America" raised some eyebrows. The customs agent was gentle, but our already sweaty brows from the fever that had started in Tahiti only made us seem guilty of something. We were asked to thoroughly clean our hiking shoes and could then be on our way.

But that would be too easy: I was sure we had gotten rid of all of the food items in the appropriate bins. New Zealand is an island and VERY concerned with keeping foreign pests and diseases off its land. When the agents kept asking "Any foods?", I immediately said no, with extreme confidence. After the customs interrogation, I thought we were home free until Patrick's backpack went through the security check. Again the nice lady asked, "Do you have any food items with you?" Oh, damn we realized - there was a can of peanuts in the bag. But that was the least of our troubles, because when she unzipped his bag, there they were - the 2 beautifully round apples we had bought at Carrefour in Papeete, thinking they would be our breakfast.

We were busted. But the light night arrival, on a Sunday, meant the collection guys were no longer there and we were spared from paying the $200NZ fine. Not a great way to arrive back in New Zealand. We did get to our "splurge" hotel - which I thought was the same one we had stayed in for our honeymoon. But there was bed to crawl into and hope for a good night's sleep.

The chills, fever and severe bodily pain that had started in Tahiti persisted and we were quite clear that we needed to get to a doctor quickly. Luckily the travel clinic was but a few blocks from our hotel and with a brief look at us, the doctor knew the diagnosis - Dengue Fever, infected somewhere on Easter Island or in Tahiti. The blood test results would take 2 weeks, in which the symptoms would already have disappeared. Our perscription: rest and lots of fluids.

So for 5 days we ventured only within a 5 block radius of our Auckland hotel room, trying to cope with the affects of Dengue. We both got it good. Luckily for us, within those 5 blocks was plenty of food for take-away (the New Zealand/Australian word for "to go"), a movie rental place and shops for window shopping when we needed to get some fresh air. The hotel staff delivered a DVD player, we indulged in all three Lord of the Rings movies (since I had not seen them) and gave our bodies a chance to get well and rest from 4 months of travel in South America.

On the road again

Easily exhausted and still not 100% well, we climbed into our home for the next 5 weeks.

And so begins our journey through the North and South Islands of New Zealand in a campervan made for 2.

Navigating the roads from the drivers seat for the frist time in 4 months was tricky enough, without having the "driving on the opposite side of the road" issue to learn. But we managed it - both of us.  A few times we turned into the wrong lane or underestimated which way the traffic was going - bit for as many foreigners as there are on the road in New Zealand, in large unfamiliar "spaceships" there was never any major problem.

From Auckland, we headed towards the Coromandel Peninsula and it's hot water beach. A local favorite that we would not have found in our guide book. In Thames, a sleepy little seaside town, was unsleepy enough that it had a Walmart and our first major grocery chain - where we too experienced a first in a while - grocery shopping. Cheeses, breads, juice and in the scope similar to home. We loaded up, stocked our mini-kitchen and headed towards our first holiday park.

Registered and properly signed in, we found a shady spot under a tree and backed as close to the creeks edge - this would be our view. And for the first night, sleeping in a van, it was the perfect place to be. We hooked up the electricity, used the extremely clean bathrooms, figured out that the commual kitchen is better for cleaning up than actually cooking and said goodbye to my trusted hiking boots. They would be staying in Thames.

Not yet quite inspired to cook, we actually headed into Thames and treated ourselves to Thai. I was still easily exhausted and the idea of Tom Kha Gai sounded much better than anything I could whip up in the campervan. It did the trick and as the day had been full of funny driving, grocery shopping and plenty of newness, we decided to return to our spot under the elm and call it a night.

On the windy, country road towards this infamous beach is a strange and bizarre artists playground called Waterworks. Scupltures and innovative craft projects pump water in the air, funnel it over a waterwheel and provide even a bit of fun for adults who have time for just about anything. And so, we meandered through the luch gardens and vast space (this is something that we learned about New Zealand - there is expansive open space, everywhere.) A few videos and tire swing ride later, we knew we had to get back on the road in order to make to our final destination.

Timing is everything. Oh and having a shovel around is helpful too! Everyday, two hours eachside of low tide, people gather on this beach to soak in a few inches of boiling water that is just below the sands surface. Of course without shovel or real directions, we hoped for the best. We found the beach without much trouble and simply walked down the white expanse of sand to where the most people seemed to have congregated. We watched and observed. Most had shovels and we coming from the other direction - I think the "shovel guy" must have been over there. Our strategy: adopt an otherwise abandoned hole. And sure enough, hot water. I watched the horizon and breathed in the salty ocean air as Patrick dug - yes, I was terribly unhelpful. We only had one borrrowed bucket - what was I supposed to do. Once perched in place - in exactly the right spot where the water was not too hot or too cold, we stayed put. We watched with glee as the tides of the ocean began to consume the holes dug too close to the water...shrill yelps tended to fill the air as the unexpected chilled ocean water plunged through the sand blockades and into the hot pools. One poor chap just kept shoveling - as his girlfriend sat in what little hot water was left in the pool but the ocean waves always won. Not sure why he didn't see the errors of his ways.

When we had soaked enough and were satisfied that the tide would soon wash away any evidence of the pools, we walked back down the beach from whence we came and headed back to our home on wheels. 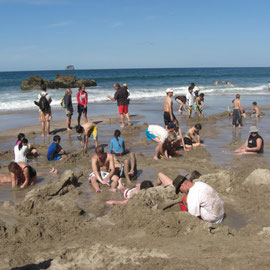 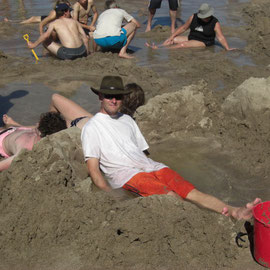 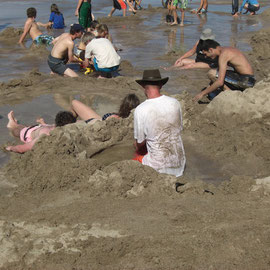 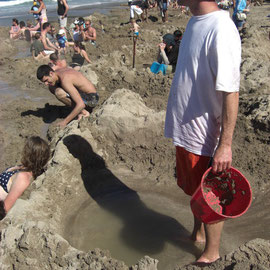 While we were sleeping in our campervan in Kiwi Paka, in Santa Cruz our friends welcomed...