Back home in San Francisco

We’re here. We’ve arrived. And everyone is speaking our language. The signs are readable. I know where I am. In fact, I have been here many, many times before. We get into a cab. The route too is familiar – in fact I have seen that billboard thousands of times. To go from the extreme unfamiliar to the extreme familiar, in a matter of 9 hours. For 10 months everything has been new, and now nothing is new.

We arrive at the front door of #8. We think the renters have left – but maybe they have not. At the door, we receive our first sign of love: a care package from Andreas and Shadi, welcoming us home with bread and milk and orange juice. We are home. And we are being fed.

And then there is just space. We arrive to a home that has been loved and taken care of. Not a peep, from the two who loved our space while we were gone. And it was just as we had left it. It is empty. The closets are empty and the books are still packed away. We have only the clothes we have been traveling with for 10 months. Oh wait, we have some of the new things we had made in Vietnam, that we were saving to where at home. Now, we are home. 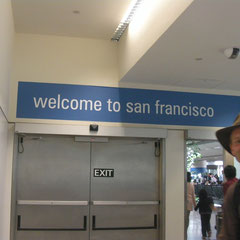 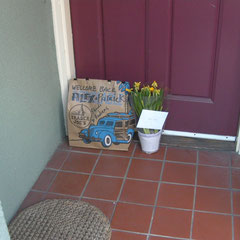 Welcome back to SF

We’ve been home less than 6 hours. We going to ClubEurope tonight…everyone is waiting for us. I think we’re crazy. We have no cell phones, no computers but somehow we’ve organized with Andrew that the taxi will pick us up on the corner.

We’re home and waiting on the corner for a taxi, with Andrew in it. And he arrives and he’s sharing Rockstar mixed with something. It is comforting, some things never change.

Not any more. I know where we are going to sleep tonight, and tomorrow and the day after tomorrow and a week from now. And breakfast will just happen, without a discussion. Life on the road becomes a series of questions: What do you want for breakfast? Where do we sleep? How do we get there? When do we go? And after a while, this constant motion and uncertainty is exhausting. And we were exhausted when we left Vietnam. When we got to Boracay, we did a bit of restoration: stay put for 10 days, eat breakfast in the hotel and venture no further than the other beach. Now we’re home and there are no more bags to unpack and repack, no bed to test, no fried eggs and baguettes to endure, no reservations to make.

We live behind walls. The walls of our homes, our cars, our schools, our cubicles, our businesses.

Though Japan was officially the last country we visited, the three short days there served more as a smooth transition between the unfamiliar and the familiar. The more significant country was the Philippines and on Boracay Island, life is happening everywhere. I remember sitting in our last open-air taxi ride and feeling the wind against my face. My eyes were open - so wide open, wanting to take in every detail. I knew this would be my last chance to see the world come alive. Fruit stalls were being reloaded, store windows and doors were being opened - and as in other parts of Southeast Asia, life is happening on the streets. Everything is open, everything is everyone else's business. It is as though the built structures can only hold life and energy for so long, before it has to spill out onto the streets, alley ways and roads. For the last four months, this has been the norm.

I noticed the significant difference hours after arriving at home. The walls seemed impenetrable and massive. There is always something between us and the lives of others - something that keeps us comfortably apart. I suppose we must each find our own way.

Even though I longed for a pair of jeans and was excited to see the boxes that we had sent home from along the way, I was uncertain I was ready to see all of our stuff. For 10 months we lived from a bag, never carrying around more than we could lift with our arms. And now, we would again be faced with all of the stuff that we have amassed. And there, at my mom’s as we stood in front of the pile of boxes, I am was sure if I was bewildered or overwhelmed. Needless to stay, we got them all in the truck, and in a matter of hours had hauled all of our belongings, in one car, back up to the city and into our home. I suppose one truck load is not so bad. And so the “stuff” disposal began – we began slowly and then the “get rid” of piles began to grow.  Funny what you don’t miss and yet hang onto so tightly.

We are all settled back in and even have room to expand. But we are wiser and pickier and perhaps the stuff will not return so quickly.

While we were home, probably sleeping, the world welcomed...

The plan was to be in Yosemite for the weekend for the annual YSC trip. And yes, we would need to pack our bags again. On the road again, we were expecting the cold front that had seeped into the Valley, but after two terribly cold nights, two lost hikers and visions of warm homes back in the city, we collectively inspired the clan to drive back. So on Sunday night, after hot showers and a few glasses of red wine, we sat around our make-shift dining table, ate Raclette and played a boisterous round of Taboo. Shadi, Andreas, Kirsten and Kelly – thank you. This is exactly why we were ready to come back.

The story of the box

We sent our first package from Valparaiso Chile in October 2007. Amidst more traveling, Dengue Fever and driving around in a campervan, I simply was not diligent about tracking its path to Pacific Grove. Weeks went by and after my mom emailed that there was still no package, I started to wonder. It was now Christmas time and the box had been located: lost mail - the abyss of undeliverable mail that is somewhere in the Midwest. I thought of the Island of Unwanted Toys in the story of Rudolf and wondered what other jewels were waiting to be claimed. Sadly, I wasn’t fast enough and the package was retuned from whence it came – all the way back to Casa Latina in Valparaiso. I made the mistake of using their address as the return address and off it went.

But according to the tracking system at usps.com it had actually arrived in Chile. So there was hope that we might get it back. And somehow when I called there, with rusty Spanish, an intern from Germany answered the phone, assured me that it had indeed arrived and they were just waiting for someone to claim it. She would be happy to take it the post office for me…and charge me for the postage.

And then she went back to Germany. And now all I had was email and a few crazy calls with Rosa…in Spanish. Si, she assured me she would send it. That was at the end of February. In March in Saigon, I finally called again, this time from a land line, and again she promised.

At the end of March it was time to involve a professional. I sent Monica the emails, she translated and sent them off. Even as a native speaker, she got no further. They would get to it when they could, they were busy. Casa Latina is a 5 room guesthouse, 5 minutes from the post office – I am not really sure what was keeping them busy for 4 months.

We arrived in SF and the reality that the box would never make it back to the US was setting in. So much for not being attached. But the contents are from 4 months of travels in South America and mean something. I am going to let myself be attached.

So, in this age of Facebook, Linked-In and good cross-cultural communication, I started to look. Who is in Valpariaso Chile and who can go get that box and take it to the post office? Sadly, I found no immediate connections so I took a chance and typed in “ex-pats Valparaiso” into Google and sure enough there was the answer.

Amidst a few blogs and a website on real estate investing in Valparaiso, I found him: Matt Ridgway. I emailed him the saga of the box and asked if he would lend a stranger a hand. And then I waited.

And when I was about to give up, there it was: a reply in my inbox. He would do it. A week later he had the box in hand, a week later it was re-packed and inspected, days later I sent a check, a few days later the check was received in NY at his friend’s house and then another day later it was at the post office. I have a tracking number, it is on its way.

Package update: there was a slip in the mailbox today. I think my crazy plan actually worked. Kind of significant that it was today.

A year ago today we left and now we are home and so grateful for:

Anja, Monica, Selena, Andrew, Micha, Alex's mom + Patrick's parents who helped us out while we were away.

And all the others who we met along the way, who is some way or another, changed our lives.